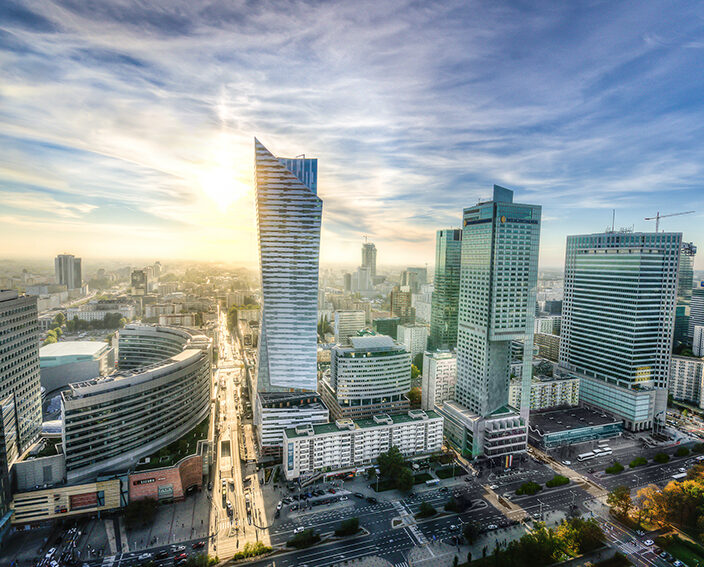 Surprise, disbelief, and maybe even shocking information? Warsaw, among Poles, connotes with business, development, greater opportunities, expansion and … traffic jams. In the meantime, according to the Impacts report, prepared by the international advisory company Sevillas, over 40% of office space in the Polish capital received a green certificate. It makes Warsaw one of the most ecological metropolises in the world.

Sevillas reports show that construction is more and more environmentally respnsible and conscious in the capital. In the report, next to Warsaw, there are also mentioned cities such as Chicago, New York, Houston and San Francisco. At the same time, Sevillas noticed that even though many cities, including Berlin or Oslo, set much more ambitious zero-emission targets, the office buildings with WELL, BREEM and LEED certificates make up less than 20% of all the office space. According to Chris Cummings, the director of the Savills Earth advisory group, there is a noticeable strong competition on the market for buildings that meet high environmental standards. Both tenants and investors will strive for modernisation of the existing office resources.

Nevertheless, it is clear that selecting the relevant sustainable building certification can only be an addition of much broader ESG strategy which forms the way to climate neutrality. As a reminder, from 2030 newly constructed buildings will have to comply with the zero-emission criterion, and in 2050 it will also hold for the existing buildings.

Warsaw cares about the climate

The environmental performance of Warsaw is also confirmed by another report by Knight Frank – Active Capital, where was assessed the level of city sustainability according to green certification of the buildings, as well as the amount of green areas, activities which limit the climate change, or urban pressure.

The survey included 286 cities around the world, and Warsaw took 20th place in the ranking! It turned out that London and Paris are the most ecological cities. For comparison, Kraków was only on the 65th place, and Wrocław on 89th. The main impact on this rating was poor air quality and the negative effects of urbanization.

Warsaw residents can be also proud of a pretty good result of greening urban areas. According to the HUGSI Index 2020, it took 23rd place in the world (with a result of 51% of the city’s area) – for comparison, in Krakow, green areas occupy 57% of the area (thanks to which the capital of Małopolska reached the 3rd place, giving way to Dortmund and Vilnius). However, there should be improved the accessibility to city bikes, as in Warsaw there are only 3.25 city bikes per 1,000 inhabitants (in Paris, 11 bikes per 1,000 inhabitants).

There are more and more activities carried out in Warsaw which are to promote climate neutrality. The Warsaw Green Building Standard is another city initiative for sustainable construction. It will be a set of rules and requirements in terms of water management, energy efficiency or heat and cooling supply.

The information from the reports is encouraging, but it is high time for other Polish cities to follow greener Warsaw. We hope that green investment will become the standard, because it is a chance for a better, healthier future for next generations.